Thirsty Owl Wine Company’s story began when Ted Cupp purchased 150 acres from Robert and Mary Plane, trailblazers who implemented the Cayuga Wine Trail, on July 2, 2001. In the fall and winter of 2001/2002, construction began on both the tasting room and the wine making facility. The following spring of 2002, with Shawn Kime as its first employee, work began on the lake vineyard located between the tasting room and the lake. Cabernet Sauvignon, Syrah, Pinot Noir, and Malbec were planted here.

On September 13, 2002, The Thirsty Owl Wine Company opened its doors for the first time with Mary Dauber managing the tasting room. We had four wines and produced approximately 1,200 cases. In December 2002, Jon Cupp, an Ithaca College graduate, moved his family from Atlanta and relocated to the Finger Lakes, joining the staff as President to provide leadership and company growth.

Since 2002, we have increased production by over 1000%, and in those years, the Thirsty Owl Wine Company's name has become synonymous with award winning wines. The winery has won many prestigious awards, including the Governor's Cup and the John Rose award for their Rieslings. We produce some of the area’s only Malbec and Syrah, along with unique blends, reds, whites and ice wines.

Since the beginning, The Thirsty Owl Wine Company and the Cupp family have prided themselves on producing quality, signature wines reflecting the unique characteristics of the Finger Lakes. We hope you’ll enjoy them as much as we’ve enjoyed making them. 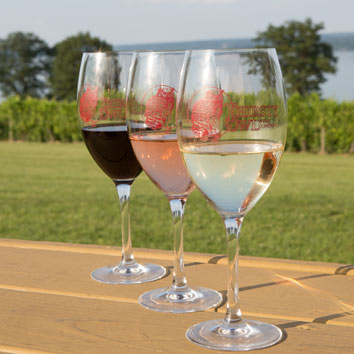 Jon was born in Toledo, Ohio, and was raised in Rome, NY. He has a BS in Business Management from Ithaca College, and after graduation, lived in Atlanta, GA, for 7 years, working in management for Enterprise Leasing Company. He moved back to the Finger Lakes area in late 2002 to start Thirsty Owl Wine Company with his father, Ted, where for the last 16 years, he has been responsible for the growth of the company in the capacity of sales, marketing, retail, winemaking, and everything in between.

Jon is a really busy guy and a true jack of all trades in the wine business, so he’s seen it all. What does he like about the Finger Lakes and what he does for a living? “I’d have to say the natural beauty of the Finger Lakes, along with the many outdoor opportunities is what I like most about being here. What I like about the wine business and my job the most is that we are farmers, retailers, wholesalers and marketers all rolled into one. I get bored easily, so the many different facets of my work make it much more appealing to me. Additionally, I do love wine.”

Jon doesn’t get much spare time, but when he does, you can find him hunting. A lot. His other interests include following his favorite teams, the Buffalo Bills and Boston Red Sox. He also enjoys spending time with his wife Jen and their kids - especially watching all 3 of his children participate in their many sports and activities. Finally, he really, really loves the Cupp family dog Fenway, the winery dog of Thirsty Owl. 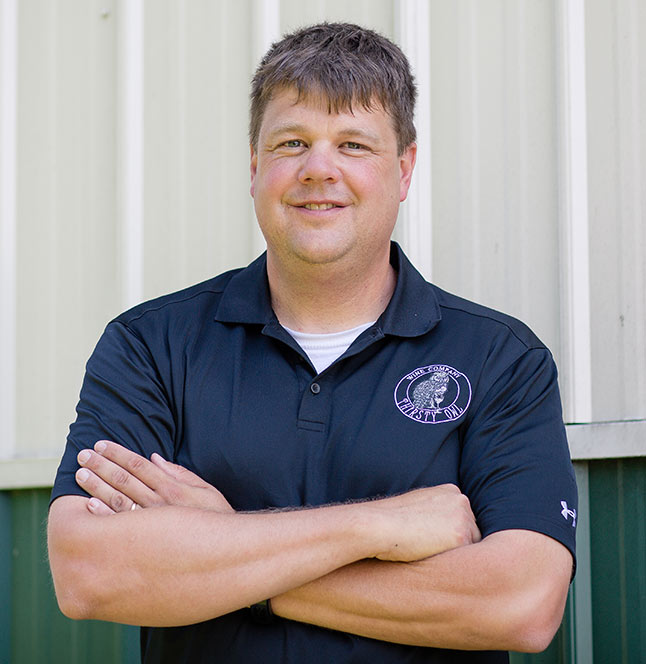 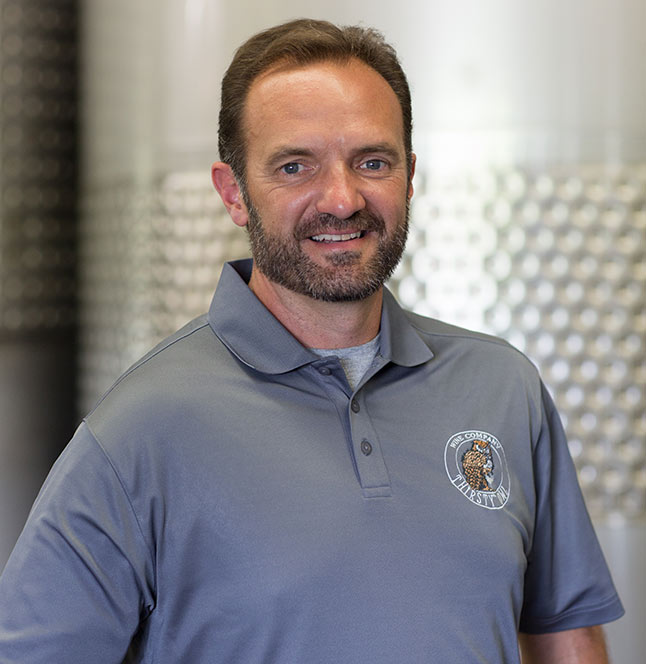 Shawn has been with Thirsty Owl since opening their doors 20 years ago, and he’s been making Thirsty Owl’s signature wines ever since. Originally from Romulus, NY, he attended and has degrees from Morrisville College and Cornell University. Since the age of 14, Shawn has spent most of his life working in agriculture, and got his start in the winemaking industry spending two years working for one of the earliest Finger Lakes Vinifera growers.

“As a Finger Lakes native, I am proud of the fact that we are producing cool climate varietals that are on par with any region in the world. We are subject to seasonal variation here, and I like the fact that we have the opportunity to embrace those variables. Every Vintage is, and will be, different. Our goal is to make changes in the vineyard and winemaking based on the year to produce wines that not only reflect our region but the growing season. I can recall what the weather was like from every year when I think about the wine we made. I don’t think winemakers from California or Australia can say the same thing. My favorite thing about my job? Change. It’s never the same thing from one week to the next. Winemaking and grape growing are very seasonal and cyclical in nature.”

When he’s not creating award winning wines, Shawn likes to spend time in the great outdoors with his family.

Kyle has been with Thirsty Owl since 2009. He is from Waterloo, NY, and has a BS in Wildlife Management from SUNY Cobleskill. He especially enjoys living and working in the Finger Lakes. “I like how pretty the different seasons are, all the different outdoor activities and things there are to see within a short distance. I love being part of the growth of Thirsty Owl and how close I’ve become with all the employees. It’s a family-like atmosphere. Being able to work outside in such a beautiful region is one of the best parts of my job.”

“It’s been great to be a part of this region’s growth and to witness it become a more widely recognized destination of world class wine.  It’s also nice to see other local businesses opening to support the tourism in the area: breweries, distilleries, cheese trails and all of the new restaurants that feature local items.”

Kyle loves anything to do with the outdoors, including hunting and fishing. He can often be seen driving around the vineyard on the tractor with his beloved dog and best friend Paisley, who rarely leaves his side. 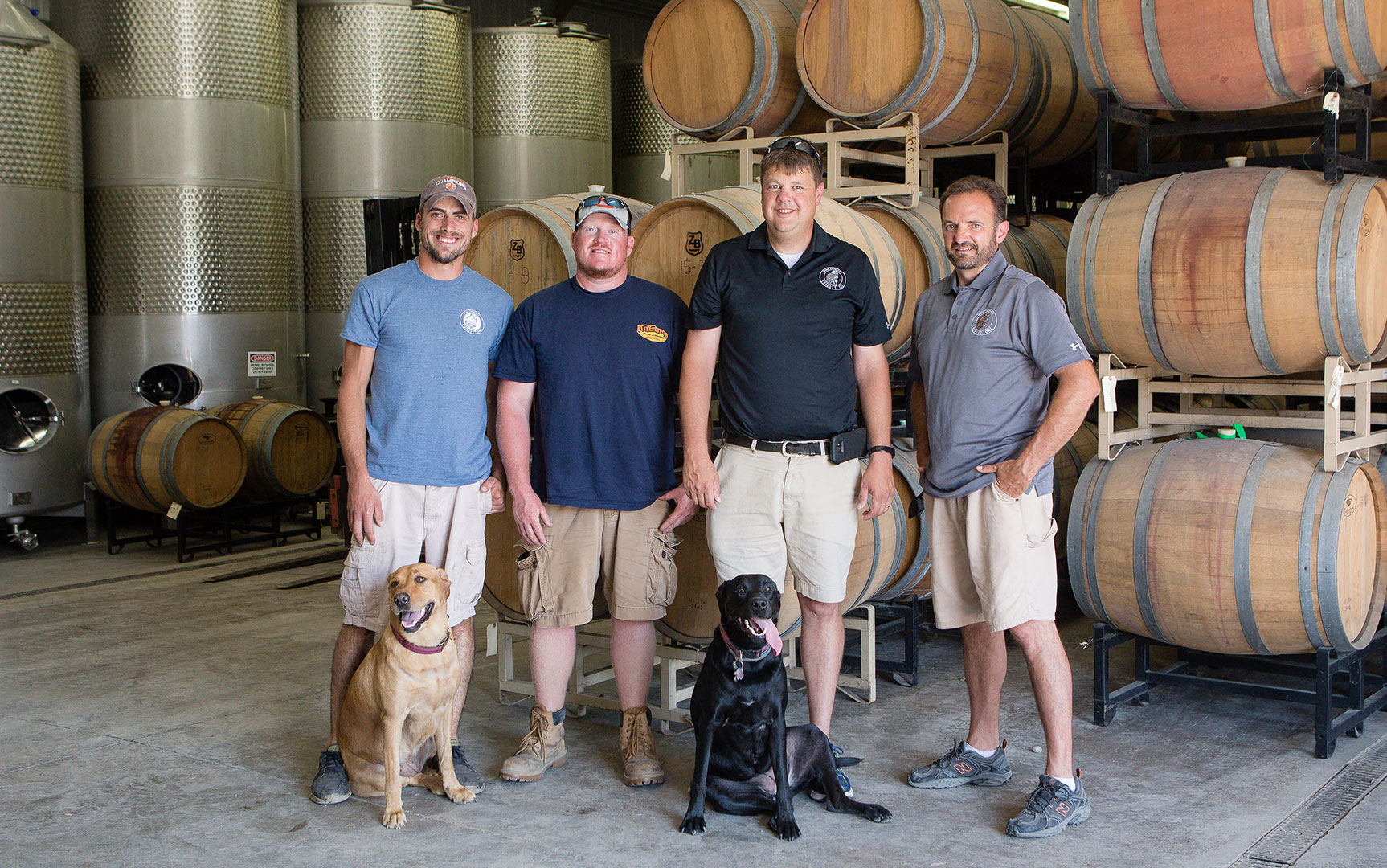